How to Spend New Year’s Eve in Atlantic City

If you’re searching for things to do in Atlantic City on New Year’s Eve, you’re in luck! From fireworks and delicious menu options to casino promotions and live entertainment, North Beach Atlantic City won’t disappoint. Ring in the New Year with panache by reading about the best NYE events in AC below. 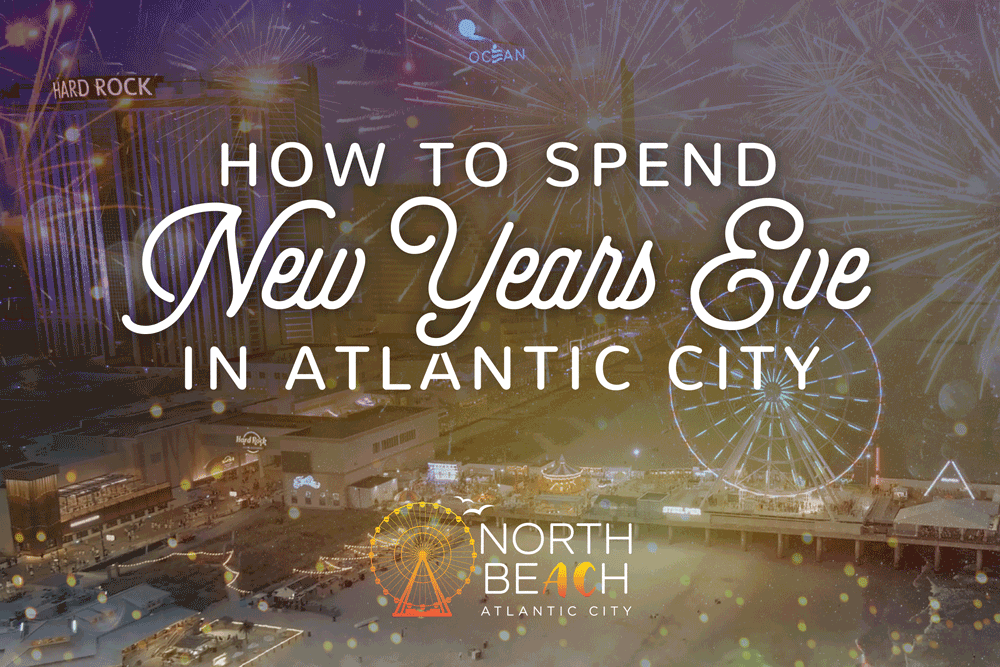 Where to See New Year’s Eve Fireworks in Atlantic City

Every year, guests can view a magnificent display of vibrant pyrotechnic effects from the beach in front of the Tropicana Atlantic City Hotel & Casino. See the sky light up from the Boardwalk, beach, or a cruise this New Year’s Eve in Atlantic City.

Where to Eat, Gamble, & Play in Atlantic City on New Year’s Eve

Toast to the New Year at Nola’s Bar & Lounge at Ocean Resort & Casino. This New Year’s Eve, indulge in a glass of complimentary champagne as you dance into 2022 with live entertainment by The Rockets at 7PM and 3AM Tokyo at 11PM.

Party into 2022 with an epic bash hosted by world-renowned electronic music trio, Cash Cash, at HQ2 Nightclub! The three DJs and producers have been selling out shows worldwide for over a decade, with collaborations including “Take Me Home” featuring Bebe Rexha and “Can We Pretend” with Pink.

Hosted bar from 9pm – 11pm. Cash bar after 11pm. General admission tickets, without the hosted bar, will be available to purchase at the door after 11pm. Tickets may be purchased at the door on the day of the event based on availability.

Prices are subject to change.

End 2021 with a bang! Let loose in Atlantic City this New Year’s Eve with Ocean Resort & Casino’s ultimate New Year’s Eve Hotel Package. Indulge in this one-of-a-kind, extravagant experience with your plus one starting from $55,000.

All of these fantastic deals could be yours:

Treat yourself and your date to an exclusive AC North Beach NYE experience you won’t find anywhere else. To reserve this hotel package, please call (609) 783-8000.

During the Cheers to the New Year Party, guests can celebrate drink specials, live entertainment, and a Margarita Toast at midnight, all with no cover charge!

The Roaring Twenties are upon us! Dougherty’s Steakhouse and Raw Bar will feature live music by Hildy & The Peptones, a traditional 1920s-era jazz band. Dancing is encouraged!

Join Tony Orlando, Casino Entertainer of the Year, for a special Atlantic City New Year’s Eve at the Superstar Theater. Tony Orlando has sold millions of records, featuring mega-popular hits like: “Tie a Yellow Ribbon ‘Round the Ole Oak Tree”, “Knock Three Times”, “Candida”, “My Sweet Gypsy Rose”, and “He Don’t Love You (Like I Love You)”.

With his enigmatic stage presence, you’ll quickly see why he’s a legend among his peers and the public.

Enjoy three delicious courses for only $19.99!

Details: Earnings for slot play only, to be available on your next trip.

The grand prize finalist will have 10 minutes to physically report to the vault. Names will continue to be drawn every 10 minutes until there are three finalists.

Test your mettle this New Year’s for a good cause! The Atlantic City Polar Bears will make their annual plunge into the Atlantic in front of Resorts Casino Hotel at noon on New Year’s Day. Benefits go towards the Cancer Support Community New Jersey at Gilda’s Club.

Ring in 2022 with a legendary package for true rockstars. The $2,022 Double Platinum Package can be booked now through the end of February, with dates bookable through June 2022.

Those interested in this package should email [email protected] to book their stay.

Ring in the New Year in AC North Beach by rocking out with Low Cut Connie! Earning accolades like “Pandemic Person of the Year” and the second coming of Springsteen, Low Cut Connie is sure to impress. Guests can also enjoy the talented Sixteen Jackies and Sandy Beach! Plus, there’s an after party right after the show hosted by Adam with DJ Kava (additional ticket purchase).

Get ready to party hop at Showboat Atlantic City’s grand New Year’s Eve bash! This over-the-top celebration includes multiple venues with different atmospheres. Enjoy amenities such as a 5 hour open bar (6 hour for VIPs!), a live concert, a dueling piano bar, a karaoke bar, a unique lounge, DJs, a live band room with a light show, and a VIP area with catered buffets.

You don’t want to miss out on the Showboat Hotel’s event of the year! See their website for more information regarding individual ticket information.

Ring in 2022 at Bally’s with a fabulous dinner show hosted by legendary Hall of Fame DJ, Jerry Blavat “The Geator with the Heater” as well as featured performances by Soul and R & B icons, Harold Melvin & the Blue Notes. The group’s hits include “If You Don’t Know Me by Now,” “Bad Luck”, and “The Love I Lost.”

Tickets include a Prime Rib dinner, dancing, open bar, and champagne toast at midnight. Must be purchased through TicketWeb by 12/24/21 at 8pm EST. No same day ticket purchases will be available at the Box Office.